Rabbit Hole is one of those movies that starts out about the death of a child and slowly opens up into new ideas and new realizations until it finally arrives at profound questions about the infinity of the universe, the mysteries of space and time, the complexities of happiness and the impossibility of life and death. It makes you realize just how finite and un-malleable time really is; how large and impossible life can be; how truly insignificant we are within whatever it is out there beyond the solar system that we have no concept of and that could, beyond all living logic and reason, stretch on forever and ever amen. It makes us appreciate the little, simple things that we can grasp onto and understand because, when it all comes down to it, it is all we really know in this big, complex mess of a world. What’s above the clouds and beyond the stars isn’t for us to know, which is fine; we've got our own stuff to deal with anyway.


That’s what Rabbit Hole is about. It’s about whittling the world down into manageable things in order to take steps forward, one day at a time; to find order in the mess and ultimately guide a life into, hopefully, happiness with as little destruction and suffering along the way as possible.

Oh yes, this is a movie of ideas. All true drama is. Howie (Aaron Eckhart) and Becca (Nicole Kidman) have lost their young son. Howie moves on while trying to appear as if life continues. He willingly goes to the loss groups and finds comfort in watching a video of him and his son on his Iphone.

Becca however, seems composed and yet cold, putting everything inside. She's confused but doesn’t know about what; can’t stand the pathetic people at the group; wants to rid the house of everything that reminders her of her son; and resents her mother (Diane Wiest), who also lost a son, for trying to relate to her. Her son, after all, was a 4 year old who ran out on the road while her brother was a 30 year old heroin addict who overdosed.

Soon Becca, off from work, begins following the boy who hit her son until they finally meet face-to-face and talk in the park. She finds comfort in him, realizing that he is just a boy, riddled with guilt, trying to move on. Was he going too fast that day? It hardly matters in the grand scheme. The two spark up a friendship of sorts in so much as that they feel that each is probably essential to the others recovery, or else just a way for Becca to continue to hold on as best she can. He may have taken her son but, is he really to be blamed? Is anyone?

And then the movie, without breaking it’s narrative simplicity or quiet emotional power, begins pulling back to reveal larger, more profound concepts, not just about life and death, but about the universe and the possibility that maybe there is another, alternate one where, right now, in their suffering, these people could be happy.

It’s not so much a question of Heaven, but rather a question of if this is all there is. Is life only as it appears before us? What you see is what you get? Or are there things out there, working, somewhere else out of our sight, where things are better, happier, nicer? A place where little boys can’t be taken away because they aren’t 30 year old heroin addicts? Maybe there isn’t and such thinking is just a means to grab on to any semblance of hope in order to cope with the hand you’ve been dealt. The movie doesn’t try to answer these questions. How could it? These thoughts are simply the logical extension of death, which, in a sense, gives one a whole new perspective on life.

The film was directed by John Cameron Mitchell who has done an about face from the flamboyance and excess of his first two features Hedwig and the Angry Inch and Shortbus. Here Mitchell isn’t flashy or sexy but rather stark and desolate as he allows his characters to cope with this situation on their own natural emotional terms. Sometimes humour sneaks through, but then again, why wouldn’t it, as humour seems the only natural way to cope with tragedy.

And then the film ends, as Hereafter did, with the three most profound words that can come in any work that deals with life and death: I don’t know. That is, after all, all we every really know on the subject.
Posted by The Taxi Driver at 10:25 AM 4 comments:

The Golden Globes 2011 Plus a Celebrity Connection

To all the people who spend weeks and/or months writing about awards shows in advance, making predictions, guessing who will what to whom and when and live blogging and all that jazz, well I am not for you, or you are not for me, or however Shakespeare put it. In other words, to this mind, it's kind of a waste of time. Of course awards shows are fun to watch and talk about for about five minutes after the fact, but other than that, who cares? Like year end lists, awards don't represent what the Best Movie of the year is. How could it, there is, to quote William Goldman, no such thing; simply the reflection of which movie a group of people decided they liked more than the others. But regardless, while I should really be finishing that Rabbit Hole review or working at becoming a better critic, here's my 2 cents on what happened last night:
Could Hena Bonham Carter actually be Edward Scissorhands in Disguise? You Decide 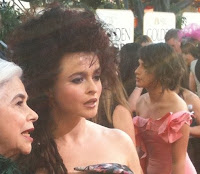