The assignment was simple. Get in a group of 3 or 4, pick a song and craft a performance around it.

I remember her perfectly. The overweight, unattractive, mostly disliked girl from grade school. She volunteered herself to go and went to the front of the class to stand; alone. The music began. My Heart Will Go On By Celine Dion. 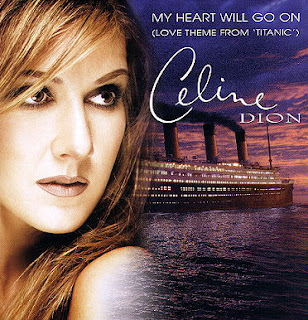 Forgiving the since inherited cultural cheese factor of the song, what I believe I bared witness to was a girl with nothing to lose taking her one moment of "all eyes on me" to show that she had something beautiful in her soul. It was strange, provocative, and awkward all at once. It was, plain and simple, art. And like most attempts at art, beauty, whatever it is in people's minds and souls that they need to get out, it was greeted mostly by  a collective: Huh?

And even though I probably got a better mark, my friends and I bashing the living shit out of cardboard instruments to a song that was written by people who looked like this: 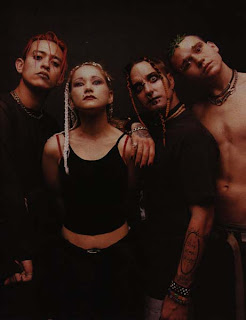 That girl walked away with the moment and, to a certain extent, had my envy. Brilliant or a disaster, she had put it all on the line. That no one cared was irrelevant. The moment belonged to her. All my friends and I had done was perform. She expressed something. I don't know what it was, but there had to have been truth in the room that day.

That's what I thought of today as I watched writer/actor/director/performance artist Miranda July's The Future (2011). Just like that dance, it is the kind of quirky and quietly profound film in which average people look inside themselves in hopes of finding answers to life's hard questions, only to come out on the other end to realized that oh, maybe there aren't any after all. Could life really be that simple?

And yet for all of July's wild and fancy arty farty tendencies to grind her movie to a halt at any applicable moment in order to bear her (and her characters') tortured/confused/aloof souls for all viewers to see in as abstract a means as possible, by the end, thankfully, just like that girl from grade school, what July sees through those big blue eyes of hers is, more often than not, I think, truth and beauty. The Future is, plain and simple, art. 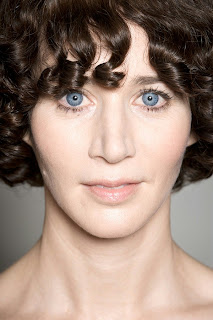 The movie is about two people, Sophie and Jason (July herself and Hamish Linklater). They live together on what looks like meager means. He does bottom level tech support from home and she teaches dance. "Oh, you're a dancer?" Someone asks her. "No. I just teach." 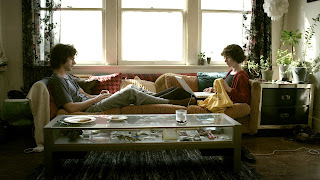 They find a stray cat, Paw-Paw (voiced by July) who they take in to the vet. It will need to stay for a month but, at the end of that, it can go home with them. Feeling like their time to be free and figure life out is coming to an end, they decide to take that month off and discover themselves and what makes them happy. All the while, the cat eagerly awaits the love that it will find from it's new owners.

Both characters quit their jobs. He passes the time by getting a door-to-door volunteer position trying to sell people trees that he is ill suited for and dislikes as much as his regular job, but for no money. She stays at home, trying unsuccessfully to make a dance video which is beautiful and expressive and that looks nothing like the ass shaking of her colleagues that are drawing big numbers on YouTube.

Feeling as though Jason's road to self discovery is finding Sophie left alone, at home, awkward and confused, she begins an affair with a middle aged man. He owns his own business, has a good kid, a nice house, no problems within sight and makes her feel sexually alive.

However, apart, both begin to feel as though their lives are spiralling off, away from one another, into unexpected and undesired directions. Sophie doesn't know whether she is satisfied just being the woman for a man who doesn't require anything from her other than for her to be his. And Jason, who we learn in an opening scene believes himself to have the power to stop time, is so scared and confused by the possibility that maybe he isn't fit to do anything of worth in life, cowers away; leading to a fantastic scene in which he uses his abilities to stop time while the moon looks down, trying to convince him that he can't hide forever.

Like July's debut film Me & You & Everyone We Know, another indie quirk fest that found beauty lurking in the mundane rhythms of every day life, she once again shows the incredible way she manages to tell a character driven story almost entirely through feelings and states of mind. Just like that dancing girl, July aims to bear the art within her soul and leaves drama behind. It's the kind of film that sets out to express the humor, fear, confusion and despair of being a 30-something looking into the future and having no idea where you're suppose to go and how you're suppose to get there.

Through all of the film's uninhibited artistic ambition, I'm back thinking about that girl. I'll never forget that moment because, regardless of presentation or intent, in my mind, it was perfect. It didn't raise her social status or gain her any new friends, or even entertain the class like my group had done, but it was exactly what its creator had intended it to be: pure and honest; her interpretation of the world in which, for a moment, nothing else mattered.

Like all art, the performance ends and the moment passes and we're left to wonder whether the world is a better off place for having allowed us to bear witness to such a rare spectacle or whether it all just goes on, the same as before, not mattering much now that it is gone.

And so, as another day grinds to a halt, but one unanswerable question of life remains. When all is said and done, looking into the future and all it's possibilities, is there really very much difference between this: 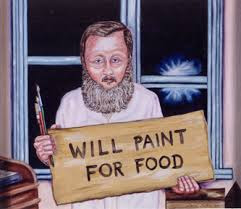 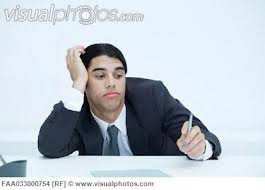 When in the end it all comes down to this: 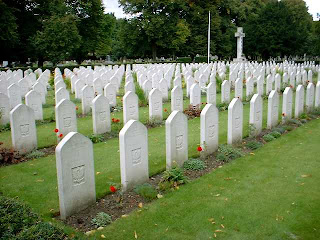 Labels: Celine Dion, Hamish Linklater, Indie Gem, Me and You and Everyone We Know, Miranda July, My Heart Will Go On, The Future
Newer Posts Older Posts Home
Subscribe to: Posts (Atom)