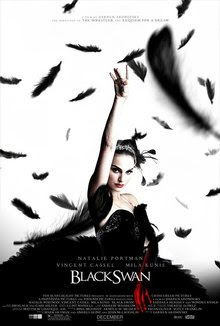 The story of : A princess is turned into a swan. True love is the only thing that can break the curse but her love is tricked and falls instead for her evil twin the Black Swan. The princess, who cannot live with the curse and cannot live without love frees herself through death. In a sense, this is the story that director Daron Aronofsky has been working his entire career towards telling. The film may revolve around the trails of a ballerina but Black Swan is no more about ballet than Requiem for a Dream was about drug abuse: it’s about a character chasing an impossible dream outside of their human grasp. That’s what all of Aronofsky’s films have been about.

One of Aronofsky’s great attributes is that he isn’t afraid to follow his characters unapologetically into their own oblivion and thus Black Swan isn’t so much a film as a memorizing thought piece constructed of ideas, fears, hopes and despair that doesn’t so much tell a story as ram headfirst right through a character’s psychological state as it dissipates under mounting pressure. Rarely has self-destruction been so hauntingly beautiful.

Natalie Portman stars as Nina, the naive, precious ballerina who lives with her overbearing mother (Barbara Hersey) who gave up her own career and now lives vicariously through her daughter. Nina, having dedicated herself entirely to the perfection of her art, wants nothing more than to be cast in Thomas Leroy’s (Vincent Cassel) newest rendition of . Leroy, a fierce, sexual, genius, knows that Nina can play the White Swan, but believes her to be too rigid in her perfection to play the Black Swan, who’s technique needs to be lose and seductive.

The toying Leroy, maybe out of French masochism and maybe because he sees a buried sexual frustration, casts Nina in the part regardless. She is thrilled but practice is torture as she can’t quite nail the part. She is too frigid, too pristine and too desexualized for the Black Swan. Also along to torment her is the new girl Lily (Mila Kunis) who isn’t half the dancer that Nina is but is promiscuous and dangerous and has the dark allure of the Black Swan, a temptress driving Nina slowly towards the brink. There is also Beth (Winona Ryder), Leroy’s former star who has now been forced into retirement and is hospitalized after a (intentional?) car accident as well as Nina’s mother who shelters the girl like a child, keeps her away from all other outside pressure (sex, drugs, life) and gruelingly pushes her towards the perfection she never achieved.

Slowly all of the outside pressures begin to eat away at Nina, destroying her sanity as Leroy abusing her, molesting her, degrading her in order to bring out her inner Black Swam, pushes her, along with Lily, towards discovering her dark side. She is consumed by fear and hatred and sex and even murder as she begins having hallucinations of her being transformed into the Black Swan.

On the surface Black Swan appears to be about the way an artist’s ego will slowly lead them into oblivion as they strive to find perfection and meaning in their art. That was, in a very different way, more or less what Aronofsky’s The Wrestler was about as well. However, by conveying Black Swan’s plot and by trapping it into a defined thematic explanation is to subvert away from the hectic, driving, narrative free fall that the film is. Like Requiem for a Dream, Black Swan is more experience than story (this is filmmaking as state-of-mind at its most forceful and, at times, unbearably painful), and is thus more a meditation of how we are slowly driven insane by reaching desperately to achieve the things that are least important in life: fame, money, recognition, perfection ect.

Aronofsky, throughout his career, has always chosen the perfect mediums from which to explore these concepts: math, drugs, cancer, professional wrestling and now ballet: all areas that place value on superficial endeavours and distract from life's essentials: love, friendship, happiness. These are the arts of self-destruction. He makes films about people who are exposed to a plane of their existence that is foreign to them, sending them spiralling into an obsessive state until they have cut themselves off from anything that could provide them solace.

What Nina finds is that to split a personality down and limit it to the influence of either black (Leroy and Lily) or white (her mother) is to create a weak emotional state in which, when one is introduced over top of the other, it will ultimately consume and destroy it’s counterpart. In Black Swan, Nina is ultimately on a quest to find perfection at any cost just to discover that perfection can only be achieved through a sacrifice more grand than anyone should normally be willing to make: a complete and utter sacrifice of the self.

And so Black Swan cannot simply be spoken about in terms of aesthetics, technique, acting, writing: the general pieces that comprise a film, which I have not done here, because it is more than film. It is emotion, expression, ideology and, above all else it is violent, unapologetic rapture. This is one of the year’s best films.

An now a related Celerity Connection:


Could Natalie Portman really be Dakota Fanning in Disguise?
You Decide.