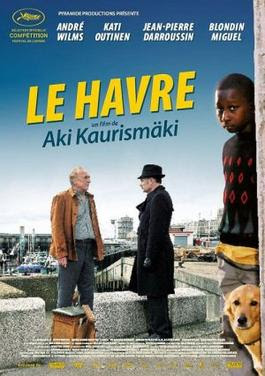 Aki Kaurismaki’s is the cinema of restraint. There are no wasted scenes in his films, no dialogue that says anything other than the minimum necessary to make the point, no flamboyant dancing of the camera and no emotions that ever seem to quell beyond a murmur. If anyone ever cracks a smile of affection in Kaurismaki’s world it plays more like rapture than a small gesture, as his characters often stand, frozen in contemplative tableaus, often times so pronounced that they boarder on the comedic. These are quite films that play as if part of an extended fairy tale or comic strip, their movement and content limited by the economy of the frame.

That’s the world that the Finnish master lives in: a strange cross between the bright and building melodrama of Douglas Sirk mixed with the offhand static lull of Fassbinder and a comedic touch so deadpan that it, at times, boarders on the surreal. It is, needless to say, an acquired taste for some. “You’ve never seen another movie like this” Roger Ebert once said of Kaurismaki’s Man Without a Past, “Unless you’ve seen another Aki Kaurismaki movie.”

Which brings us to Kaurismaki’s newest Le Havre, which embodies everything that has come to be expected from the director and yet is a little livelier and sweeter than most of his work. Kaurismaki makes films about the down and out: the people who often fall between the cracks of a society that could just as well do without them.

This one focuses on Marcel Marx (Andre Wilms), a shoeshine man in Le Havre who, day in and day out, carries around his tool box and little stand in order to bring in enough money to support his wife Arletty (Kaurismaki regular Kati Outinen) who he loves and who loves him back. There is no dialogue in the movie that ever expresses any outward declaration of love between the two but Kaurismaki manages to sneak it in, rather tenderly, by the way these two hold themselves; act in the presence of each other; create an aura in the room when they are together. That’s Kaurismaki’s approach to all of his drama: to let it linger instead of underlining it. “She’s too good a woman for you.” The local female bartender tells Marcel. “I know,” He replies. “But she’s too good for everyone so for now I’ll do.” The glass is half full.

Then two things happen. Arletty falls ill and is taken to the hospital where it looks unlikely she will live much longer. Not wanting to tell Marcel for fear that it would ruin him; she has the doctor conceal her disease. Meanwhile a shipping crate that was bound for London arrives in Le Harve by accident and is opened to find a collection of refugees from Africa. One, a young boy named Idrissa, is encouraged to run and escapes.

One day, while eating his lunch, Marcel finds the boy, offers him some food and is followed home by him that night. Where Marcel differs from most Kaurismaki heroes is that instead of being a lonely low class bum wandering through life in no direction in particular, he is a man of little means who instantly, without being asked, wants to help this boy who is of even lesser means. That’s the magic of the film that gives it it’s fairy tale-like quality. This does not bode well with the local investigator who is on the hunt for the illegal immigrant.

The entire film is a wonderful collection of episodes in which friends try to help Marcel who tries to find the boy’s origins and raise the money that would assist him in getting to London. The true treasure of the film is in these scenes where we see the warmth created from a community of low class people banding together in order to help out a fellow drifter who wants no more than they: to simply get by. The film has been described as a fairy tale or fable by many, a quality created by Kaurismaki’s unique worldview: life sucks, but our time in it doesn’t need to.

This story, in typical Kaurismaki fashion, is told in a minimalistic style that is mostly concerned with the quite nuance of human nature as it propels the story forward. Only in a Kaurismaki film could Marcel get away with the excuse he uses to convince a refugee shelter director that he is the black Idrissa’s uncle and only in a Kaurismaki film could the sight of a yellow dress bring such a smile to one’s face, especially having witnessed the care and love it was packaged with.

If all of this sounds maddeningly vague that’s maybe because there is no other way to describe it. Kaurismaki's films are all touching yet deadpan love letters to the down and out. They are a rebel yell for the lower class without ever raising their voice above a whisper, and that always seem to make a halfway political statement without ever the hint of much politics. The message is always clear: society is structured by ridged and superficial notions of class, but it is those at the bottom, left out and forgotten, who are the most human.

It’s a world so fiercely and uniquely unto itself that the only way I can describe it is to encourage you to see it for yourself. And it can’t be stressed enough how much you should get going and seeing it for yourself.
Posted by The Taxi Driver at 3:16 PM

Labels: Aki Kaurismaki, Le Havre, Man Without a Past