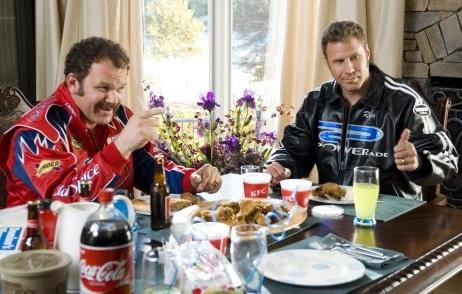 The Dinner Table Rule came about many long years ago when I was writing a review for the forgettable Owen Wilson/Matt Dillon/Kate Hudson comedy You, Me & Dupree. In the closing paragraph of said review I noted that I thought in order for mainstream comedies to work they have to feature characters who you'd feel comfortable enough inviting into your home to sit at your dinner table. "I wouldn't invite Dupree to my table," I wrote. "I don't know if he'd make it or burn it down."

Then, yesterday, when writing about Bad Teacher, I remembered the dinner table rule again. I wouldn't invite Cameron Diaz's Elizabeth to my table either. She's too selfish and self centered. She'd simply take advantage. Now think of the comparison I made for that movie with Bad Santa. I'd be more than happy to have Billy Bob Thorton's Willy over for dinner. There's a lot of things I'd like to ask him about. There is, after all, something kind of morbidly sweet in the affection he feels for the kid who presents him with a wooden pickle covered in his own blood for Christmas.

You see the Dinner Table Rule doesn't necessarily mean that you like the person you'd invite over (although it helps). It means that there has to be enough human depth presented in a character to intrigue you to want to learn more. Thorton isn't a nice guy in Bad Santa, but he's not a bad guy either. He's just a bum who's never had an outlet to give a damn about anything before. He is, in his own special way, still capable of good. I'd like to talk to him about that.

But Dupree was a lose cannon and Matt Dillon's affection for him was inexplicable. He screwed up everything he touched. Cameron Diaz in Bad Teacher simply exploited every situation she was faced with for her own personal gain. And if any of those old hags from Sex and the City ever come around my neighbourhood I'm putting the whole house on lock down.

But how fun would it be to sit down with Emma Stone in Easy A or just about every movie she's been in, or Ryan Gosling from Crazy Stupid Love, Steve Carell from Dan in Real Life or even Jason Biggs from American Pie? Would anyone reject the opportunity to sit down for a meal with any character from John Hughes' classic 80s teen comedies? And let me tell you, if Loyld Dobler from Say Anything ever swung by I'm not sure I'd ever let him leave.

The point is that a dinner is personal. It's to be shared with people we known and who interest us. We don't let any random stranger off the street into our house. We invite the people over who we want to share an intimate setting with where we can engage in fun banter as well as get to know each other better. The characters thus, that we would invite over, are the ones who have connected with something in us on the human level. We see some of ourselves in them and they've shared something personal with us through their respective films. We want to know more, maybe even be friends.

That's what mainstream comedy needs. It needs to feel like we are being invited into a world and sharing a comedic situation with someone we could see ourselves liking in real life. We want to see good things happening to good people because we're good people as well. We wouldn't invite over the hopeless cynics, the selfish morons or the guys just trying to get laid. Sure, Billy Bob might eat all the chocolate from the advent calender, try to find the hidden safe and take advantage of my kindness, but he would also not fail to get me the Christmas present that I want, even if it is covered in his own blood.
Posted by The Taxi Driver at 9:46 AM