When I heard that Quentin Tarantino was making a western, my first thought was that it would more or less be like this:

While watching it, I wondered what the odds were that Tarantino made Django Unchained as a Western so that his violent down South blacksplotation mega-fantasy could take place during a time in American history where all of the white characters could get away with saying "nigger" as many times as their hearts desired without heeding the cries of racism that some of his former films have inspired?

And come on, that's what Django Unchained is. It was advertised as Tarantino's take on the Spaghetti Western, and okay, yes it does have Ennio Morricone music and does take place in the West, but really I think he would much prefer the film be know as the first historical instance of Blacksplotation.

Just like killing off Hitler in Inglorious Basterds, Tarantino has recreated Blacksplotation by taking it back to the beginning of slavery, well before its original cinematic origins. Genius historical revisionism or pompous child-man doing whatever the fuck he wants, however the fuck he wants to? I can't quite tell anymore. Maybe a bit of both?

Hell, even the wife Django is trying to save is named Broomhilda Von Shaft. These two are, in Tarantino's own words, supposed to represent the great great great grandparents of one John Shaft.

Needless to say, Djagno is one bad mutha...shut yo mouth!

As such, Django Unchained is pure Tarantino: hip, fun, violent, over-long, needlessly self indulgent, aimless, imbued with movie references so deep and obscure that it would take a spreadsheet just to track them all and made up of a lot of great scenes which are, as is often the case, cushioned by some awful ones.

Don Johnston's Big Daddy Kane character is a particularly unfortunate creation that doesn't serve a single purpose in a 165 minute film, other than an endless scene in which a bunch of clansmen complain about the eye holes in their hoods. It's the kind of film-stopping scene that you'd expect from an Eli Roth movie.

But yes, ultimately Django Unchained is a hell of a lot of fun. It's well shot, well acted, well scored and, for the most part, well written. For what it's worth, it's also clearly the work of a man with a singular vision.

There's also a lot of bad ass slow-mo shots of Jamie Foxx as Djago unholstering and laying waste to room fulls of people. These scenes are so unabashedly hip that I almost felt inclined to label it gun-fu or something like that. Oh right, John Woo already did that 27 years ago. 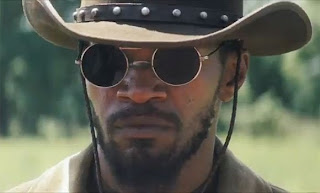 So, at the end of the day, either you buy into Tarantino's pretensions or you don't. I personally think he's a talented hack who's brilliance is sometimes overshadowed by the fact that he has no personal artistic restraint and that his films are simply jumbled assortments of pieces from other movies. The saving grace is, of course, that Tarantino has seen more movies than most of us combined and knows it.