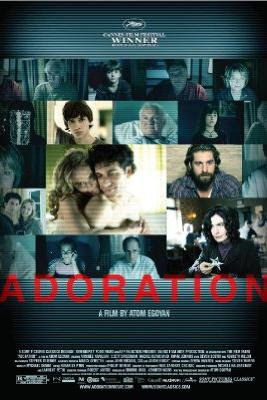 Atom Egoyan is one of Canada's premier directors and although Adoration does not present as tightly wound a narrative as one usually expects, it is still nonetheless a strange, powerful, twisted meditation on the director's personal fascinations. The film once again takes up Egoyan's preferred narrative structure of starting in close-up and gradually pulling back, revealing how a group of seemingly random people and events are actually all intertwined. This is also the first film where Egoyan doesn't seem to be hopelessly pining for his Armenian homeland and instead presents a more gentle and subtle reflection on religion and technology and how both work together and in opposition to create new pasts and presents out of thin air, to the point where we become consumed with them and they begin controlling our lives. I'm not sure all of these opposing elements fit together as well as Egoyan would like them to, but this is still a mature and though-provoking film.
Posted by The Taxi Driver at 3:19 PM