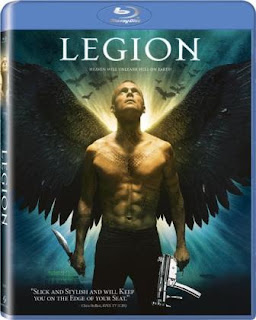 What's remarkable is not how bad Legion is but how bad the reviews of  it were, in so much as that critics approached it like it was a serious film, up for some sort of serious consideration, to be judged with serious critical tools. Critics said it was too talky; it lost it in the third; it was silly; it didn't have enough action. Really? This about a film in which, I kid you not, angels from Heaven possess the bodies of humans and turn them into profanity spurting creates? It has a spider-like ice cream man for God sake. Have movies become so polished and lifeless that critics can't spot a true howler when they see one anymore?

In fact, Legion is the best kind of bad. Sure, it's garbage, but so is Troll 2 and I'd never warn anyone away from that title. Yes, Legion exists in that special realm of serious films that approach stupid with a straight face and don't even seem to know it. It's the kind of film that doesn't have a brain in it's head but still thinks it's good anyway. Under some sort of strange reverse logic, this may actually make the movie, I don't know, kind of good? It's certainly more interesting that those big, bland, polished, empty-headed turds. Did I mention the ice-cream man?

Why the human race is being infected by angels, which essentially make them into vampire zombies, is never quite explained. Neither is why everyone in the world seems to become possessed except the handful of characters who stay stranded in some diner in the middle of nowhere. Among them is Tyrese Gibson who approaches his zingers with the ferocity of stand-up comedy. How about this nugget after a strange old woman swears up and down, bites a man in the neck and crawls up a wall and across the ceiling: Dennis Quaid can't believe that the woman wasn't killed by the frying pan he knocked her over the head with. Tyrese: "I don't give a f**k how long she been dead - the bitch just walked on the ceiling. She ain't staying in here." What about this one: when asked about the swarm of flies that mysteriously appears, "How am I supposed to know? You're asking me to explain the behavior of a muthaf**kin' pestilence?" Let's not even talk about the man hung upside down from a cross who explodes into a ball of toxic slime. What happened to his guts? Nevermind.

So yes, the movie is stupid, but it's that special kind of stupid that makes you grab your forehead in disbelief that such amateurism could exist in such sophisticated times. Oh yes, and Paul Bettany is an angel who comes to Earth to protect a child who could, for reasons known to no one but him, end the world, two guns at a time. Bettany will also star in director Scott Charles Stewart's next movie Priest as well. It's about a priest who disobeys the church in order to track down the vampires who kidnapped his niece. So there you go.
Posted by The Taxi Driver at 5:24 PM