One Minutes Review: The Promise: The Making of the Darkness on the Edge of Town 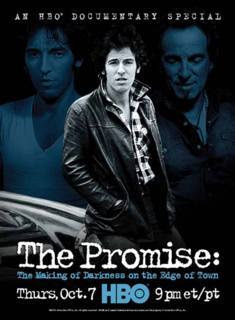 I believe in the power of not knowing. Knowledge may be power but ignorance is also bliss and you know how it goes. It always comes back to Fellini's 8 1/2 for me and those first 10 minutes (maybe the greatest ever put on film) as Guido leaves Earth and flies towards the heavens, the only thing connecting him to reality being the rope around his foot, held by his producer on the beach. I could look up how Fellini did it with a quick Google search but the less I know about it, the more special it is. It's kind of like a magic trick, which is amazing on the principle that something outside of human possibility has happened. Once the trick is explained and the reality is revealed, the magic is gone.

Maybe that's, on an intellectual level, one of The Promise's biggest flaws. The Darkness on the Edge of Town was one of Bruce Springstreen's greatest albums, which, by turns, means it was one of Rock's greatest albums. It's making is the stuff of legend: Springsteen rises to superstar status off the back of his breakthrough album Born to Run, struggles with the concept of being something (an icon) that he doesn't want to be, is embroiled in a legal battle with his manager that keeps him out of the studio for 3 years as fans anxiously wait to see what this boy wonder will cook up next, and so on.

The Promise however, composed of old black and white studio footage as well as current interviews from The Boss himself and his E Street Band members, only proves to make everything about that seminal album (so lean and stripped down compared to its predecessor) seem terribly normal: a bunch of guys in the studio jamming, recording, writing. How could a period of such mundane routine produce such a profound work? Maybe it's a question the film should have left well enough alone.

What's most interesting is Springsteen himself, who, unlike his image as being the working man's rock star, is quite and awkward and introspective; sometimes to the point of being pretentious. He rarely every looks towards the camera, preferring to divert his gaze to the floor more often than not, and is quite, self-reflective and serious. Even on the moments when he cracks a smile or emits a laugh it seems to be one of insecurity and doubt as if he's still the awkward kid who never quite got around to realizing he's one of America's most valuable songwriters.

The film itself, aesthetically speaking, is no more than a feature length bonus feature that record labels used to throw in on special edition albums when record sales were in a freefall. You can't fault the film entirely: someone as mythic and legendary as Springsteen could never be done justice, but you get to wishing that if it was only going to go halfway that it wouldn't have gone at all.