The Surest Thing about The Sure Thing 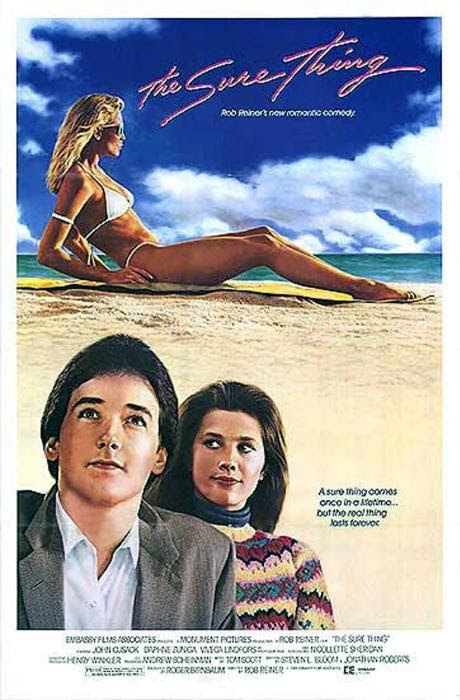 The Surest Thing about the 1985's Rob Reinber/John Cusack romcom The Sure Thing is it's plot.

Whittled down to it's most bare essentials the film builds itself upon one of the most basic concepts of theatrical arts: If you put two completely different people in a room together and have them talk for an hour and a half, they will exit changed by one another. If not, it's tragedy.

This is at the centre of all human drama. First they begin by hating and/or misunderstanding one another out of possibly fear, selfishness or naivety but soon, once they are forced into a situation that requires them to communicate, they grow to learn from one another and fill in the blanks that are missing from their own lives.

12 Angry Men put 12 different men in a room; The Man on the Train had two people come to the philosophical realization that they may have been happier had they led the other's life instead and It Happened One Night found comedy in making the two of opposing sex and putting them on the road together. The list of examples goes on forever. It's hard to screw this kind of thing up.

If anything then, The Sure Thing is It Happened One Night remade for 80s teenagers. It features young, fresh faces, a hip soundtrack and an undiscovered bikini clad blond at the other end of the road.

The film was one of the first to star John Cusack who had graduated into a leading role after haunting the background of John Hughes' Sixteen Candles. Maybe he was always destined to be the leading man Hughes let get away? His presence, over a consistent and long career, in any film always seems to guarantee it at least some degree of enjoyment and Say Anything... still remains the best teen romcom that Hughes failed to make himself.

The Sure Thing -funny, light, enjoyable- in retrospect, is maybe best appreciated as a grounds for Cusack to work out all the kinks in what would later become his most iconic character of the 80s: Loyd Dobler from the aforementioned Say Anything...which came four years later.

Here his Gib is everything we'd come to appreciate about Lloyd: an open, adventurous, likable, charming and funny youth who thinks he's got it all figured out, until nothing ends up happening in his favor, from which he actually does end up getting it all figured out.

In this case he's flunking university English on the East Coast where he has a secret crush on the class prude (Daphne Zuniga) who's in the opposite boat as him. Her mechanics are perfect but writing lifeless. She needs to live a little.

Then, not on the best terms to begin with, they get stuck together riding West to L.A. for the Christmas break (with a funny showtune singing cameo from Tim Robbins). She's visiting her lawyer-to-be boyfriend who's idea of a good time is giving her the lead in a game of gin, and he's going to visit his high school bestie who's promised to hook him up with a sure fire West Coast lay (Nicollette Sheridan in her first film role).

You can fill in the blanks from there.

And yes, they do change, become better people, learn their lessons and so on down the line. That's why, as the age old cliche continues to go, opposites do attract. Most movie characters just need a cross country road trip to realize it.