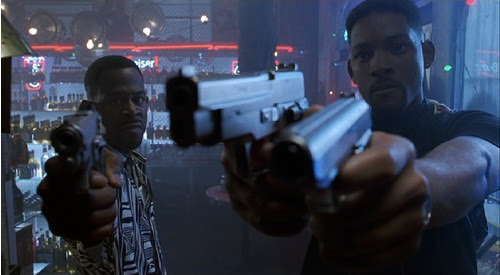 There's these two black cops. They're partners. One, Mike Lowrey is a young, drop dead beautiful hunk of negro who, in the third person declares "Fuck anyone who don't like Mike Lowery", and isn't afraid to pull his gun and shoot first whenever needed, the law be damned. The other is short, slightly hot headed, has a wife, 4 kids, a lot of expenses and a desperate need to keep his job.

Their biggest bust at this point is like a kajllion pounds of heroin. In order to keep the toxic drug fumes out of the the evidence room and encourage air flow a ventilation fan is conveniently installed and acts as a way for a European criminal nutbag to break in and steal the entire bust. This dude is a strong case for tightening immigration laws in America. He's mean and killin' the holy fuck out of anyone who crosses him, one of  whom, in this case, just so happens to be, at the time, with a whore...er...escort who also just so happens to know one Mike Lowery.

But oh wait. It thickens. Along for the job with the whr...escort is a friend, played by Tia Leoni, who witnesses both her friend and the client get taken out by that crazy Turkish fucker. Luckily, just moments prior to the blood bath she excuses herself to go to the washroom.

Unfortunately she's spotted and narrowly escapes a lot of bullets. In a panic she calls the one person who she feels she can trust: the dead escort's most recent contact, Mike Lowery. Only problem is when she makes the call to the station, Mike Lowery ain't nowhere to be found. Who is? Marcus, his partner.

Chief, played by the can-never-be-blamed-for-bad-material Joey Pants, has a brilliant idea. Have Marcus pretend to be Lowery. Marcus ain't doin' it. Does Marcus like having a job? Yeah. Then Marcus is doing it!

Marcus takes the phone and flubs the hello. The chief holds him up. Marcus says "hole on" and puts his hand to the receiver long enough for an extended conversation where the chief tells him that he must sound more like this man that this girl has never spoken to in her life.

Okay, back on track. Marcus gets Leoni's address and heads over there. On the way from the car to the entrance he talks himself up. He's gotta act and sound, once again, like this man she has never met. He knocks. Who is it. It's Mike Lowery. How does she know it's him. He says "Mike Lowery" again and then again, expecting, I guess, that she'll find the answer to her hard question in Lowery's name.

The door opens. She comes at him with a baseball bat. Yada yada. He has had enough. Listen lady. I'm here to help so you so stop coming at me with a damn baseball bat or you're on your own. The small talk is cut short when bullets start rippin' through shit.

They're on the run. Marcus has to take her to a safe place. He's got it! Mike Lowery's place. Ah, I see, Marcus has easy access to Mike's apartment through playing tough guy with the gets-a-boner-every-time-he-thinks-of-what-it-would-be-like-to-be-a-cop front desk clerk whose presence will only lead to a useless-as-tits-on-a-bull scene in which said desk man gets to tell Marcus how much he wants to be a help with his case.

Marcus takes Leoni up to Mike's apartment, where he doesn't know where the light switch is. He donno where anything is. He always redecoratin' 'n shit, he helpfully explains. He walks backwards and falls. He donno why he fallin' 'n shit in a place he live.

Mike gets filled in on the whole situation the next day by chief in a tough assed monologue which ends with him telling both of them that they are going to keep up this little act so they don't lose their only witness. What!? Hell naw. Mike don't want no one messing up his expensive stuff and Marcus has a wife who is never going to allow this. Of course he does. Without her there would be no scene in which he packs his bags as shecan't handle much more of this, which manages to somehow also name drop Coke not once but thrice.

Back at Mike's, Leoni looks at the wall of pictures and wonders who the man in them are. It is, of course, the real Mike Lowery. Oh shit, sometimes I don't look at my shelf, I forget all the pittures I got here. That's my partner Marcus. He kindly explains to her that it's a cop thing. At Marcus' house is all pittures of him. Oh, I see, because when she first saw it she thought maybe it was pictures of his lover. Ah nah. He ain't gay. She buys it. Sheez, sometimes cop work can be hard.

Fuck me dead, I feel stupid! And we're only about half way through!

No wonder people blame Michael Bay for how shitty his movies are even though his team is what keeps production value high and action/melodrama pumping steadily across the running time. Take away the hunks, babes, special effects and speed and just, honestly and sincerely, look at his movies as fast paced photography. Dude knows how to turn an abysmal script into a great looking movie. Just prepare to get stupider for having seen them.

Except The Rock. That movie is (Rock) solid.
Posted by The Taxi Driver at 10:13 AM