Revisiting The Wicker Man Remake (3.5 out of 5) 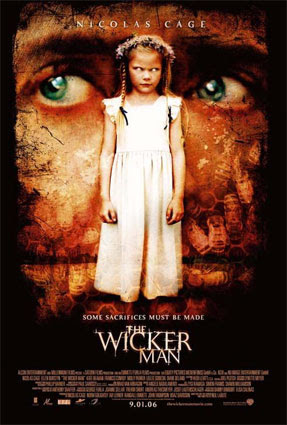 Considering the first paragraph of my review of Death at a Funeral, I thought I'd look back at a review I wrote for Neil Labute's remake of The Wicker Man a couple years ago.

The Wicker Man is not a very good film, but it’s an interesting experience. It is not engaging, not scary and not even all that entertaining or likable, however I’m giving it three and a half stars which, in some small way, translates into a recommendation. I recommend it because, as big a mess as it is, it’s also dark, angry, cynical and, pessimistic; a wolf in sheep’s clothing. Hollywood has been playing it safe for so many years that it’s kind of uncanny that anyone would have the nerve to make this at all.

That anyone is Neil Labute who, outside of Todd Solandz, is probably the most unrelenting member of the new group of “auteur” filmmakers to emerge from the independent world in the 90’s. However, like many filmmakers before and after, Labute operates under a system that Solandz has thus far been able to escape: the “one for us, one for them” archetype. Thus, filmmakers make a film that the studios can sell, then giving them the freedom to then make the one that’s dear to their hearts. It can’t be stated as fact, but I have a sinking suspicion that if it were not for this system, Labute would not even be interested in poor remakes of cult horror films. However, to view the Wicker Man as the product of its specific maker, we begin to understand why Labute would be drawn to it.

When we first meet the cop Edward Malus (Nicholas Cage) he is involved in an arbitrary scene in which, after pulling over a mother and her daughter whose doll has blown out of the luggage strapped to the top of their car, the car is struck by a transport truck, trapping the two inside as they burn to death.

Miraculously unharmed, Edward, on his time off, receives a letter from a former fiancée who left him at the alter and is now living on a private remote island called Summersisle with her daughter who has gone missing. The letter asks Edward if he could journey to the island and help find her.

On the island Edward is not exactly welcomed. He is greeted by three women who hassle him, asking how he got there in the first place as you must be invited to enter. As Edward begins his search for the missing child he discovers that the island is run by a mysterious figure know as Sister Summersisle (Ellen Burstyn), that men seem to be voiceless slaves and the possibly murderous women talk to Edward in that exasperating way people talk when they are never telling quite as much as they know.

The plot thickens as Edward discovers that the little girl may be his own child and may have been kidnapped by the cultish inhabitants of Summersisle in order to sacrifice her so that the coming year produces a good honey crop (Summersisle is a bee keeping colony after all). I doubt that I would be giving much away if I tell you that nothing is as it seems.

Watching the Wicker Man we get the sinking feeling that it is simply playing by the numbers: the opening sequences spin the wheels of a plot that Labute never fully seems to be engaged in. Instead we discern that he is using the film as a backdrop in which to deal with the fears and anxieties that he so brutally and hilariously tried to repress back in his 1997 debut film In the Company of Men. That film centered on a corporate slime ball named Chad who, feeling threatened by the inclusion of women into the office world, makes a bet with his friend to become romantically engaged with one and then crush her when she least expects it.

In the time that has passed since, we have seen the equality of women in the work force rise and the uncrowning of men as rulers of the working world. The Wicker Man shows us the next logical social progression: a society that has been taken over by women who have created their own laws to govern their own ways of life and are ultimately vengeful towards the men who have repressed them for all these years. Notice how the only man of power on Summersisle is Edward because he is a working professional: a police officer with a badge and a gun, constantly threatening to arrest the women for misbehavior under a law created by men to govern a man’s world. If In the Company of Men was an attack on the shallowness of corporate men in a dog eat dog world, The Wicker Man serves as a counter attack against feminism in a sexually liberated social setting. These women are like Chad in reverse.

What else is interesting is that Edward is allergic to bees. If we trace the bee’s mythology we understand that they were seen as feminine creatures. Homer in his work also thought of bees as wild, untamed creatures. The list of comparisons is endless. It might not be a stretch to believe that this is how Labute perceives militant feminists: as wild and untamed creatures that are willing to sacrifice any man for the betterment of themselves. It seems no small irony that the one man on Summersisle who has the ability to overpower the women is also fatally allergic to bee stings.

The problem is that if Labute’s metaphor makes sense, his film doesn’t. It seems to be operating under the framework of the 1973 Wicker Man, but the plot never becomes more than this; as if Lebute is just spinning the wheels while his interests lay elsewhere. The car crash scene at the beginning seems without purpose, even worse is Edward’s constant flashbacks to it. Characters appear and we don’t know who they are, Cage runs around the island yelling at women, and an ending ritual in which the inhabitants of the island dress up in animal costumes is so strange that we can never quite grasp whether or not Labute is making a horror film or a strange comedy.

The truth is that a lot of people who see the Wicker Man will hate it; it is sloppy, convoluted, and confusing. Yet to not see it might be a shame as it unflinchingly goes for the throat when most horror films seem to be stuck on autopilot. I’d rather a film fail interestingly than succeed without inspiration. I therefore could have hated the film too, but I wasn’t satisfied: why would a great filmmaker reduce himself to a by-the-numbers picture? I’m reminded of a quote from Labute’s great 2003 film The Shape of Things in which a character states that Picasso didn’t take a shit and call it art. He knew the difference and that’s what made him Picasso. I think Neil Labute knows the difference too.
Posted by The Taxi Driver at 11:35 AM