You ever get the sensation of too much tranquillity? Like being in the woods on a beautiful day with butterflies fluttering and birds chirping and other miscellaneous things floating about and it just takes it out of you? It reminds me of a famous Richard Pryor quote, "There's something about the woods that just makes you want to...s**t." Ridley Scott's Legend from 1985 suffers from tranquillity overload. It has golden hues, unicorns galloping in slow motion, fairy's glowing in the sky, pedals falling in slow motion, water glistening, Mia Sara, and enough soft focus to make the lightest of eyelids hang heavy.

That's the light side of the story. As the opening credits reveal, the universe exists due to a balance between light and darkness, this balance creating legends. Think about this though, if light came along and banished darkness into an underground abyss, how is that balance? Isn't that light triumphing over darkness and casting it aside? If there were balance wouldn't the two get along and work towards achieving the same desired ends? Forget it. The darkness is ruled, no kidding, by The Lord of Darkness (Tim Curry, under so much make-up that it's of little consequence whether it's actually him or anyone else). The darkness is made up of hammers thundering against metal, sparks flying and fire bursting out in every direction (which is kind of the opposite of darkness if you think about it, but no matter). The story involves some such business about how unicorns keep the world in light and Lord wanting to kill the last two.

This is all undermined by the fact that the hero (Tom Cruise) is an afterthought behind Scott's relentless visual muck. Legend is a film comprised of nothing more than thin air. There is not one meaningful thing that happens in it; not one speck of continuity and not one character who is remembered long enough throughout the duration of the film to amount to anything meaningful.

There is though, an interesting Celebrity Connection: 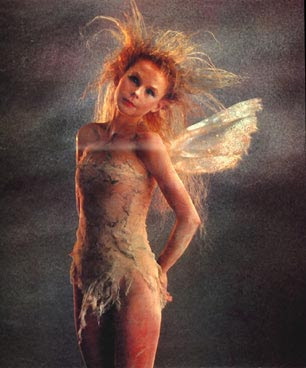 Could that fairy really be Taylor Swift in disguise?
Posted by The Taxi Driver at 10:43 PM