I just happened to catch a picture of Justin Bieber at the MTV Movie Awards, accepting an award for something (I don`t know because I couldn`t be bothered to watch) and it struck me that the mini prima dona, who shot to fame for reasons that have everything to do with anything but talent, is sporting a new look that looks remarkably like another former child star has-been:

Could Justin Bieber really just be Corey Haim in disguise. You decide. 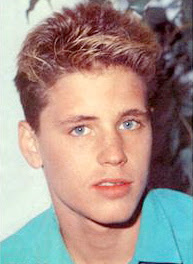