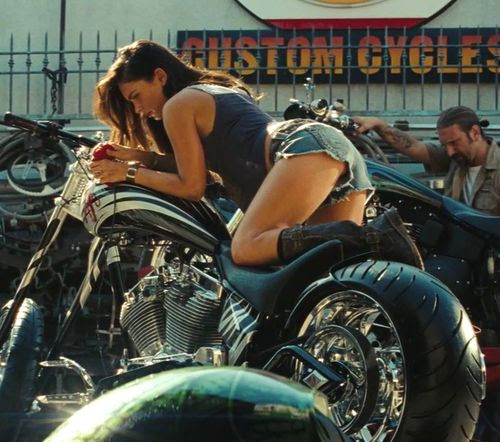 The late Gene Siskel used to say that a movie needed to be more interesting than a documentary about its actors having lunch. Now, in 2009, a new method of thinking is needed. A movie needs to be better than playing a video game based on the same material. Or, how about one just for Transformers? A movie needs to be better than playing with the toys that it is based on. Take your pick. The moral of the story is that Transformers: Revenge of the Fallen isn’t much more than a video game minus the interaction. It is a big, loud, stupid, uninvolving, empty movie in which the action sequence reins supreme and all else is subordinate to it. It's the kind of movie that, if not firing on all cylinders, isn’t firing at all.

What’s left is a head-on collision of non-stop special effects and pyrotechnics, aesthetically comparable to a train wreck with about the same amount of emotional and intellectual depth. You could cut every character scene out of the film and wouldn’t lose much. Come to think of it, you could cut any whole section out and would be no worse off. Not a good sign at two and a half hours of running time. Allegedly the screenwriters on the film (three of them) were paid 8 million dollars for their work. Times must really be tough if, or so it would seem, 8 million barely gets a screenplay out of the planning stages.

This, under the obsessive, excessive hand of sometimes great action filmmaker Michael Bay is not filmmaking. It is instead an exercise in physical, mental and intellectual endurance, created in order to satisfy the narrow minds that need as many visual jolts as there are frames per second. A film built, not from artistry, but to fill a demand for faces to put on t-shirts, and coffee mugs and lip balm, and so on; to sell soundtracks and special editions of DVDs and toys. Who needs a story, or characters, or even coherence for that matter, when you have tie-ins?

So the story: Why bother? There is no story here, there is barely even a script, and what’s there is buried so deep amid piles of useless action that it ceases to be comprehensible. It's something about the evil Decepticons wanting to destroy the sun maybe? There is a certain point where, when assaulted endlessly, the senses simply shut down and cease to decipher what is going on. Revenge of the Fallen is a two and a half hour blur of noise and colour.

But now, isn’t this stupid, after the events of the first film, the humans and the Autobots have formed a coalition to protect Earth from Decepticon attacks. This is kind of funny considering how infantile the humans and their weapons were against the Decepticons the first time around. Why are the humans even in the film? All this proves is how useless their presence actually is to the Transformers franchise. Their three possible functions are: fire ceaseless rounds of ammunition to no avail. deliver bad sitcom punch lines or run away from expositions. Sometimes, during particularly ambitious moments, they do all three at once.

The humans are played by Shia Lebouf who is working below his rank when he deserves the kind of fast, intelligent roles James Woods used to get and Megan Fox, the extent of whose talent as an actress is pretty much summed up during the first scene she appears in here. These characters contribute nothing to the already non-existent plot, but are along for the ride out of default: they were part of the first film. But really, any human character could have been played by any actor and it wouldn’t have made any difference.

Transformers: Revenge of the Fallen is too big, too bloated, and too ambitious for its own good. It doesn’t stop to breathe, to develop its characters or at least give reason why they even need to be present in the first place, and doesn’t have time enough to at least create Transformers for us to care about. Think about it. The robots really aren’t that interesting. On their own, only about 5 or 6 of the dozen plus have discernible personalities and when engaged in battle they are simply a smear of spare parts, welded together in combat that flashes by so quickly that the eye can barely focus on it before it’s gone.

To top it all off, the film itself is just sloppily made with some scenes throwing continuity between edits right out the window. What was fun the last time around now feels like a bloated, lazy over-indulgence. It's as if Transformers has become such a huge franchise that fans wouldn’t even care if the film was made well as long as things blew up real real good.

There is, however, one very entertaining moment in the film, possibility providing an example of the problem with all of the human elements of Revenge of the Fallen. After the Witwicky home is overcome by Transformers made out of common household appliances, the Autobot, Bumblebee, who is hiding in the garage, comes to the rescue and shoots half the house to smithereens. After the incident, one of the characters talks about how they can’t tell anybody about what happened because the Transformers must be kept secret for the benefit of national security. Forget national security. If you live in the suburbs and don’t notice a giant robot Camaro blowing away half your neighbor’s house in one swift move you may be deaf, dumb and blind, or else are in a Michael Bay movie.
Posted by The Taxi Driver at 8:39 PM