Saturday was the biggest day in terms of sheer star power. Unfortunately we missed Hillary Swank, Sam Rockwell and Tony Goldwyn at the Conviction premiere because we instead decided to stroll around Yorkville and saw no one other than Roger Ebert. Guess we either came too late or the stars keep a low profile on the busy weekend days. Regardless The Conspirator was a film I certainly wanted to check out, not simply because it has a great cast or because I think obert Redford's A River Runs Through It is one of the best American films ever made, but because I have read the script and thought it was a masterpiece. 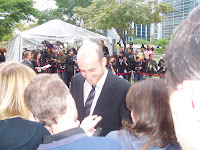 The writer, James Solomon, was the first to show up. I didn't know who he was but the guy who he was signing for apparently did. He was nice and funny and took pictures for anyone who wanted them. "Don't worry guys," he said to some screaming fans, "I'm just the writer." Nice guy. 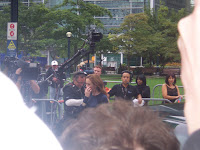 This is around the moment that I scream "Holy crap it's Alexis Bledel" prompting my girlfriend, a huge Gilmore Girls fan, to almost have an aneurysm. We didn't expect her, she got there before almost everyone else and showed up in a car and not the trademark SUV. I had my Sisterhood of the Traveling Pants 2 DVD in hopes of catching Blake Lively later on in the day but Alexis only signed for a few people, missing us by about an inch. 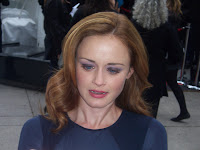 Yeah, apparently she must have been saying something to someone because Alexis is looking kind of weird in this one. 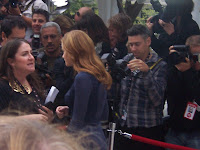 One more from the side. 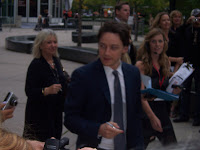 I didn't know what to expect from James McAvoy. Sometimes young stars like to sign one of two autographs to show that they care about the fans but really they just want to run to the press (*cough* Jeremy Renner *cough*), but McAvoy was the real deal. He started out at one end and disappeared right down to the other end. He was gone so long we didn't even realize he hadn't gone in yet and was still signing on his way back as seen here. Unfortunately I didn't have anything for him to sign. 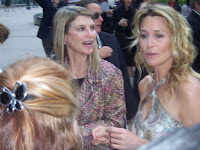 Robin Wright was glowing. Not only did she generally seem to enjoy being amongst her fans but she walked those heels of hers all the way to the end of the line, signing, joking, just being all around lovely. Didn't have anything for her to sign but wish I would have. 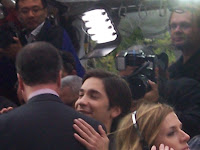 Justin long appeared out of nowhere. He only signed a few autographs but he really worked the crowd anyway. This guy could charm just about anyone. 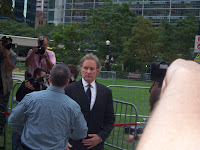 I don't mind if celebrities don't sign autographs as long as they give the fans something to take home. Kevin Kline didn't sign one autograph but he really played to the crowd. He got out, blew kisses to the crowd as if he was royalty and walked over to the press. While there people were calling for him to turn around, which he did, humorously for just a second before snapping back. It was a reminder of why he is one of the few to have won an Oscar for a comedy role. 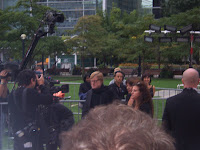 The one man who I really wanted an autograph from, not surprisingly, didn't sign anything, didn't wave, didn't even act like there were hundreds of people there simply to see him. Oh well, that was a pretty hip scarf Robert Redford was sporting. 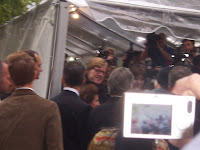 The floating head of Robert Redford enjoying his producers more than his fans.
Posted by The Taxi Driver at 9:13 PM