I'm not a festival guy. I didn`t get caught up in reporting on the Toronto International Film Festival because I don`t have time or money to go see the movies. Instead, what I care about is going and standing on the red carpets and getting a glimpse of the stars. I can see the movies in theaters when they come out, but really, when can I tell Darren Aronofsky that he`s the next Scorsese to his face? That`s where the magic is anyway. There`s a feeling of excitement as stars pull up in those black Cadillacs, guessing who it could be, hoping to get an autograph before they are whisked away to the press by their publicists.

So anyway, over the next couple of days I will be posting pictures and telling stories from the red carpet. If you want actual coverage of the fest go check out Mad Hatter at The Dark in the Matinee who is making the rounds, or Black Sheep Reviews where Joseph got accepted to be on the You Will Meet a Tall Dark Stranger red carpet. But if you want pictures of the stars, well darlings, I have them. 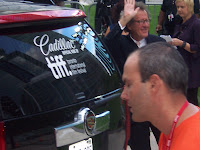 The first thing that is shocking about seeing any celebrity is the realization that they are not all ten feet tall. I always expected Geoffry Rush to be a tall guy. He`s quite the opposite actually. This was my first red carpet ever. We came unprepared without anything to sign so this one was fairly tame for us. The King`s Speech is an interesting title for me because I have read the script and enjoyed it very much. 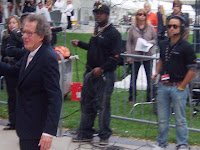 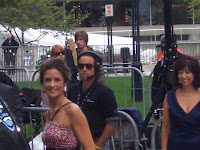 I have no idea what her name is, but this is Colin Firth`s wife. 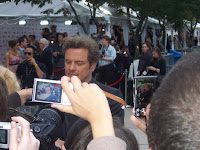 The man of the hour arrives. There was debate about whether Colin Firth would come sign autographs or not because he`s generally low-key at these kinds of things and no one really knew if he was a jerk or not. He disappeared for a moment and then reappeared after the crowd started signing Happy Birthday to him. He was very polite and very British. 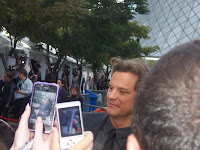 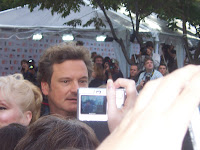 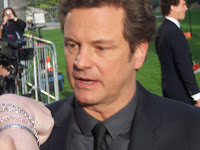 There`s the money shot.
Posted by The Taxi Driver at 9:44 PM