There was a big decision to make Friday night. It was either stick around outside Roy Thompson Hall to catch a glimpse of Clive Owen and David Schwimmer for Trust or head over to the Visa Screening Room to check out the Stone Red Carpet with Robert de Niro. Having never been to the Elgin, we decided Goodfellas trumps Friends so we headed for Elgin. 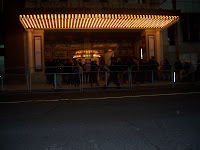 The first thing to say about Elgin is that it sucks. I haven't been to the Ryseron theatre so I have no idea if it is worse than this one, but this is pretty bad. You stand across the road on the Yonge St. sidewalk until cars start pulling up and then everyone runs for the barricades. 20 minutes later was when the cops decided it was time to close the road and as a general rule, most stars get out of the car on the right side towards the entrance and not the left towards the crowd and head right for the press. Unfortunately I was using my girlfriend's camera which is about 5 years old and doesn't take good pictures in the dark. I'll do better next year. 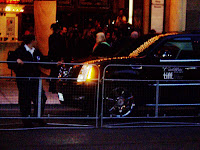 Unbeknownst to me, we really weren't prepared on Friday, Beautiful was playing at 8:00 at Winter Garden (which is in the same building as Elgin). So somewhere in that crowd is Javier Bardem. 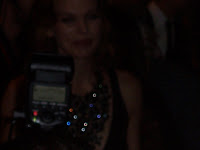 To be quite honest, at the time I knew nothing about Stone other than that De Niro was in it and Edward Norton had a goatee, and as a general rule, Norton's best movies are the ones where his character sports the goatee. Therefore I had no idea Milla Jovovich was in it or that it was she I was taking a picture of. 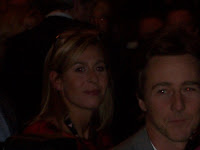 Edward Norton has a reputation of being difficult to work with but that didn't stop him from coming over to the road and signing autographs/shaking hands. He didn't do it for long but he seemed like a stand-up guy. 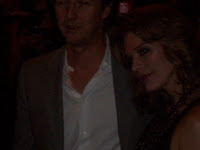 Edward and Milla. Unfortunately De Niro showed up 20 minutes late after they had already let the audience in. He turned and waved for a second and then rushed inside before his car had even gotten out of the way. No good pictures of him were captured 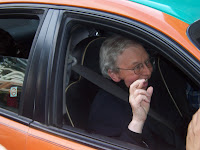 As an added bonus, Roger Ebert stopped for fans on Saturday afternoon as his cab pulled out of the Four Seasons. Here he is hoping his new show is a success.
Posted by The Taxi Driver at 11:03 AM