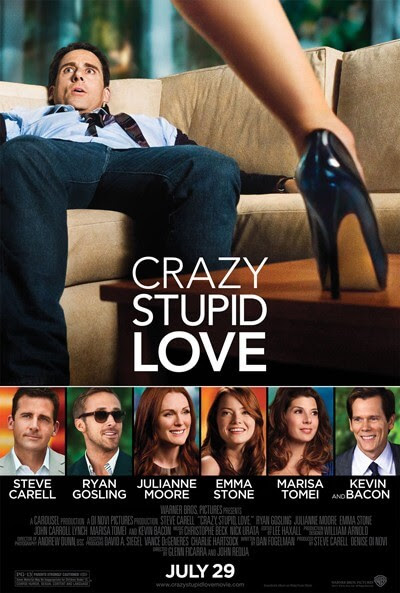 There’s a way some great actors just have of looking off into the distance that really becomes less about performance and more about finding true emotions. It’s a look without dialogue or anything more than a twist of the side of the mouth or a certain glint in the eye that hits something home, be it a man hugging his children or staring off as someone or something leaves him standing behind. It’s also a look that is most startling when comedic actors find it because it’s the moment that they feel comfortable enough with themselves to let the act down and bare some sort of true emotion. Steve Martin does it maybe better than anyone. Now Steve Carrel does it too, first with Dan in Real Life and now, in Crazy, Stupid, Love, he does it again.

It’s a look, especially now in 2011, that makes your realize that movies have become so big, dumb, artificial and ultimately meaningless, that it’s a small treasure to find on that exists at ground level and touches an audience because it deals with people and their actions instead of caricature and plot gimmicks. It’s a look, however that also, unfortunately, makes one wish it had found its way into a better movie.

And thus we have Crazy, Stupid, Love, which, despite its title, which promises insights into the strange, nonsensical, sloppy and completely unpredictable nature of love in real life, can’t muster up much more than to be a run of the mill romantic comedy. It tries too hard to be funny, not hard enough to be insightful, not much to be tightly structured and not at all to be anything more insightful than any other bi-weekly Hollywood romance. It’s good, but not good enough.

Thankfully it finds great actors to raise it into something enjoyable. Steve Carrel is warm, funny and human as Cal, long married to Emily (Julianne Moore). His blazer is too big, he wears running shoes with it, his wallet is Velcro and he’s more or less coasting through the routine his life has become. When Emily tells him she has had an affair with a colleague (Kevin Bacon who's name gets the film’s biggest laugh) and wants a divorce he doesn’t want to talk about it and instead, jumps out of the car to avoid her rambling. At least the pavement feels real.

Then one drunken night at the local haunt he comes across Jacob (Ryan Gosling) a smooth operator with the right suite, the right hair, the right shades, the right accent and the right lines. As, night after night, Jacob watches poor Cal make a drunken fool of himself at the bar he calls him over, tells him he reminds him of someone and says he will teach him everything he knows so he can get his life back together and pick up women so that he can get over Emily, his first and only love.

But then as Cal, after much funny teaching, starts to bag any woman he wants, Jacob meets Hannah (the lovely Emma Stone) who he fails to pick up but comes to him after one night realizing her relationship with her moron boyfriend is going nowhere fast. Hannah, for Jacob, is a game changer and slowly the two stories go their separate directions as Cal and Emily begin to realize their mistakes and Jacob begins to give up his ways.

All of this is nice and funny and sweet and utterly forgettable. If it wasn’t for the presence of Carrel, Stone, Moore and Gosling, the movie would be a redundant mess as it spins it’s wheels to an overblown and predictable conclusion.

But alas, in spite of unfortunate subplots in which Carrel dates a crazy grade school teacher played by Marissa Tomei and another strange and awkward one involving Cal’s family babysitter, the film is charming because it’s stars bring it warmth and humour. Carrel especially, under appreciated because he’s pigeonholed into playing morons, has a way of casting, as indicated in the opening paragraph, human glances across a screen that can either melt or lift your heart and Gosling, so very good in so many kinds of roles, finds a note for Jacob that is more about personality than caricature.

And that’s what the film offers: the pleasure of seeing the right actors come together and breathe life into an otherwise forgettable work. Crazy, Stupid, Love isn’t wholly realistic, doesn’t have any big moments of revelation like the best romantic comedies do and is more concerned with being clever and witty than about creating a full story that is engaging from beginning to end. These are intelligent and attractive actors. They know how to project humour and emotional depth in natural ways. Now that we’ve seen how good they can be in a film on autopilot let’s pray they find another one soon that is worthy of their talents.
Posted by The Taxi Driver at 5:33 PM