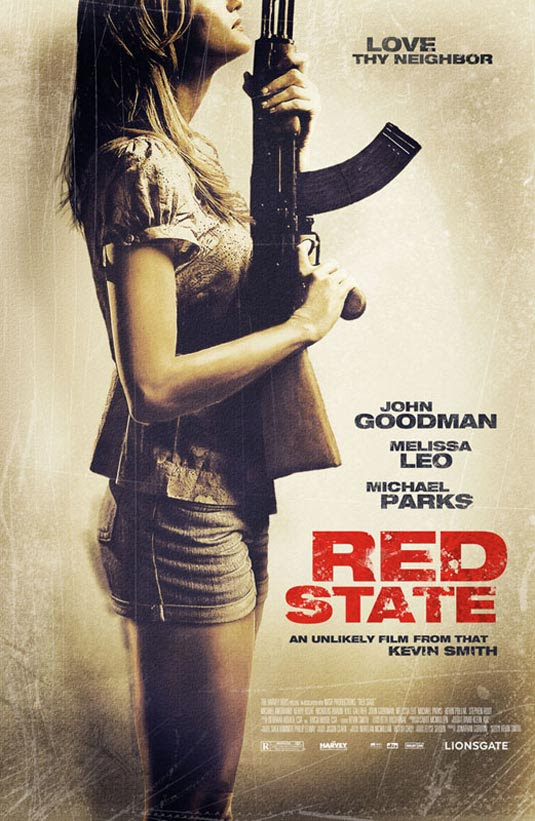 Kevin Smith’s new religious thriller Red State suffers from “The Problem of the Bicycle.” For those of you who don’t know, the “Problem of the Bicycle” was Michelangelo Antonioni’s criticism put forward towards The Bicycle Thief and Italian neo-realism as a whole. He basically said that, now that we have a movie about a man stealing a bicycle, we need one which understands the man, his psychology, what makes him tick and what ultimately leads him to the point of theft. Meaningful movies, in other words, needed to be about more than action in the present.

That’s what Red State is: all action and no thought. It's cheap slight-of-hand masked as serious social commentary. Here Smith, breaking away from his typical comedy background, is trying to make a serious movie about serious subject matter. Stylistically it works just fine as unnerving, bargain basement grindhouse. Intellectually, the movie is a puff of smoke as our hands close on nothing but thin air.

The story focuses on a mad small town preacher named Abin Cooper (Michael Park in a riveting villain role) who is supposed to represent a Fred Phelps surrogate as him and his small family congregation picket outside the funeral of a locally murdered gay teen, waving signs that say the kid is on his way to hell and other such things. Cooper’s presence is so strong around town that a local high school teacher tells her class that not even the neo-Nazi’s want anything to do with him. This is the extent of characterization in Red State.

Then one night three kids sneak off to lose their virginity to a local girl they found online. This is Sara (Melissa Leo) who says no one it getting into her without getting at least two beers into them. The kids drink down and hit the floor. When they awaken they find themselves inside Cooper’s church as he preaches a sermon of hate and then watches as a gay man, bound in plastic wrap and tied to a cross, is murdered in cold blood.

An investigation ultimately brings around the ATF lead by Keenan (John Goodman), who’s orders are to kill everyone inside after a Davadian-like firefight breaks out. This is the extent of social commentary in Red State; that, oh gosh, maybe even the good guys aren't good guys in the end.

In the Q&A with Smith that followed the screening of Red State he indicated that his purpose for making the movie was to take a stance against organizations like Fred Phelps and his Westboro Baptist Church who commit acts of hate in the name of God. This subject matter is exactly the problem as it's too large for a film of such small ambitions. That Smith has no agenda other than to cut down people like Phelps, he see the church people as no more than villains. What Smith fails to realize is that great drama is created in the grey areas that exist between ingrained social concepts of good and evil and how, as humans, people have the freedom to cross those lines  at their own free will. It's not enough to show that someone drank the Koolaide when what's most interesting is understanding what forces would lead someone to such an act. The problem of the bicycle.

Instead, Smith has made what he himself deems a “parlour trick” of a movie in which twists are taken and bodies begin to drop, not so much in order to make any sort of statement, but rather for the director to toy with the audience. He’s proven now he can make a movie in another genre and make it well but Red State too often plays too much like the same kid just in a different candy store.

And then the movie ends, not to give anything away, on several notes that I suppose Smith would like to think of as satire but which take a misguided b-movie and turn it into an ignorant one. These scenes reveal the true nature of Smith and his black and white playground politics and lead to a final line of dialogue which corrupts the movie, making Smith just as guilty as those he takes up arms against within the film. If Red State ultimately makes any statement at all it’s that not only am I right and they are wrong but let’s make fun of them for how wrong they are. That Smith can’t find a way to end his film in anything but his standard penis jokes and stoner references reflects the sad state of a boyish mentality trying to juggle with an adult concept.

Smith states that, before wrapping up his career as a filmmaker he wanted to make the kind of film that his contemporaries like Quentin Tarantino and the Cohen Bros make but that he felt he never had the kind of talent as a visual storyteller to pull-off. It’s a funny reference seeing as the Cohen Bros. masterpiece No Country for Old Man is a haunting tale of an evil force that is corrupting society, which is both masterful on a suspense level as well as sending out a haunting warning call about the society we life in. That’s what, I think, Red State ultimately aims for, but Smith never even tries to deal with the idea of evil within society or take account for the ideas he wishes to explore. He's too busy making cheap entertainment for that.

There’s no doubt that Kevin Smith is a talented guy. In the comedy realm he has made some singular films which define their generation and has a voice for dialogue that, like David Mamet, Tarantino or Neil Labute is instantly recognizable as his own. But within the realm of drama and suspense Smith is lost in a sea of his own shortcomings, never being able to decide if he’s making a statement or making the kind of entertainment that gets an audience hooting and hollering. He used to make smart movies for dumb people. Now he has, unfortunately, made nothing more than a dumb movie for smart people.
Posted by The Taxi Driver at 2:18 PM