Greatest Movies That Made Going to the Movies Suck #24- Trainspotting

Simon Appears Courtsey of Four of Them 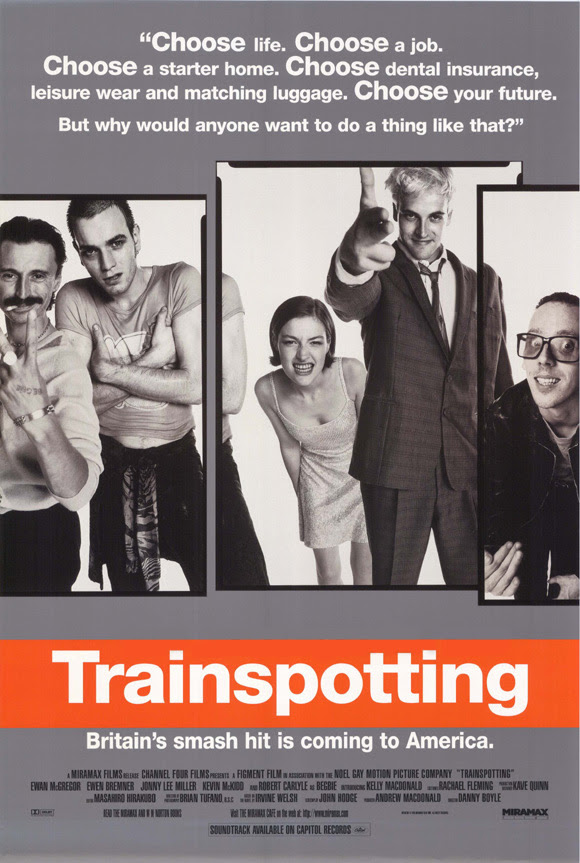 This had been one of those movies that had already achieved a following before it's eventual cinematic bombardment. I think the best adaptions are (no, not Twilight. Never Twilight). See, the late nineties was something of a blessing for cult writers with gritty, transgressive, and/or nihilistic styles. Fight Club was a-brewing, the travesty of Less Than Zero remained somewhat fresh in the minds of studio execs bidding for American Psycho, Pulp Fiction was still burning under filmmakers' asses, and American audiences were ripe for a precursor to these beauties, something miserable masquerading as awesome.

Thus, the year of 1996, Trainspotting was released upon a naive public. Danny Boyle, unknown in the States, a rising kinda-star in the European film industry for his noir thriller debut, Shallow Graves. He brought in Graves' star, Ewan McGregor, for the starring role in his adaption of Irvine Welsh's eponymous novel, a collection of connected vignettes following the misadventures of a group of young junkies. Also in the cast was Kelly MacDonald, Tommy Lee Miller (future Angelina Jolie plaything), Kevin McKidd (future Grey's Anatomy McSomething) and Robert Carlyle (future The Full Monty dude).

When this thing was released, it was released. Puritans cried glorifying drug use. Everyone else wondered where the glory was. The blackest black comedy to be released that decade--when people finally put subtitles on for the poor American audiences who couldn't understand a word--it set off a chain of controversy, acclaim, and mad dash to make a ripoff while it could still be called fresh.

Now, this is besides the black comedies featuring the underbelly of society, of various tones, success, and impact. There's Spun, a misbegotten 2002 indie starring Jason Schwartzman, Brittany Murphy, and Mickey Rourke. Requiem for a Dream, a successful drama, also from a book, made in 2000. Probably a million more I haven't seen.

But that's beside the point, the cinematic rip-offs. What it did most was really publicize drug addiction, which up until then had been treated as some glamorous rock-star-exclusive club. It managed the difficult line between slapstick and awareness, without treating the issue lightly, or getting preachy with the 'drugs are bad' stuff. It set a new standard in shock value, with the infamous Worst Toilet in Scotland, and especially the Baby Dawn episode, put Danny Boyle and Ewan McGregor on the map (sure, they split after the failure of their third project, A Life Less Ordinary) and influenced a generation of disillusioned, disaffected young things, who seemed to fast forward through the awful bits of ODing, death, and detoxing, maybe even Tommy's spiral which, okay, is relatively low-key in the midst of things, going straight for the fast-paced chase scenes, the comradely between junkies, and the relatively happy ending. Of course, that's the Catch-22, isn't it? Either make an awfully serious drug movie nobody will see, or a fast-paced drug odyssey that everybody will imitate.

People will look back on Trainspotting, no matter what the backlash, and still see a trippy, honest, brutal, hilarious, exciting, miserable, heartbreaking film.
Posted by The Taxi Driver at 11:50 AM