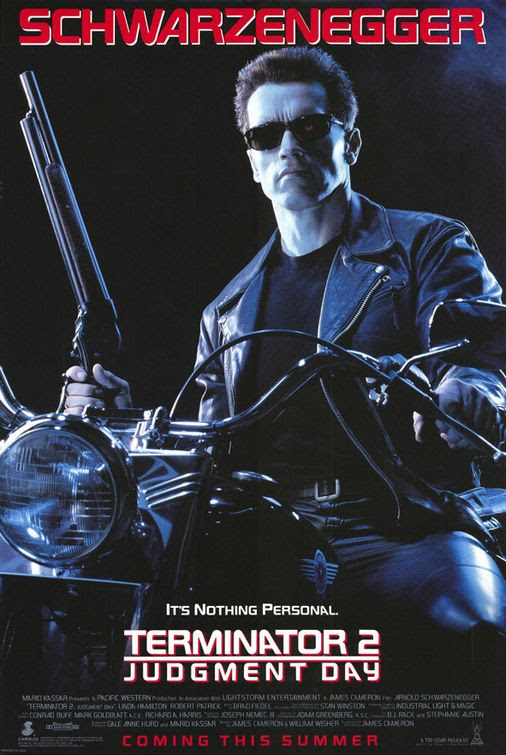 Rarely do sequels come close to their predecessors, let alone pass them. For every Godfather Part II, there is a Die Hard 2, a French Connection 2… a Gremlins 2. James Cameron’s Terminator 2: Judgment Day, is perhaps the one and only sequel that is unarguably (even Godfather Part II is debatable if anything) a superior picture to the original in absolutely every way. The characters, the narrative, the effects, the action; every aspect of T:2 is amped up and polished to a fine sheen. Of course, that is not to say the original Terminator isn’t a good movie, or essential, but when held up next to Cameron’s true innovative sci-fi epic, there is no doubt which is better.

Aside from having Arnold Schwarzenegger play a good T-101 this time around, sent back to protect a young John Conner from the evil T-1000 (Robert Patrick), T:2 carries some weight along with it regarding technology and human abuse of it. The apocalypse sequences in T:2, the ones where Sarah is watching herself disintegrate on a playground, were groundbreaking at the time, as was the explored idea of apocalypse in action and science-fiction films. Sure, nuclear threats had created an entire era of paranoia in cinema with films like The Day the Earth Stood Still and Them!, but never before had human annihilation been so blatantly on display in such an effective way. And speaking of special effects…

Remember when we didn’t know exactly what Robert Patrick’s T-1000 was capable of? Remember the first few times you would see him and you weren’t quite sure why bullets melted into him or really never stopped him? But then after the fiery truck explosion in the LA aqueducts, the T-1000 emerges as an all-silver, liquid-metal cyborg. And that is where special effects changed forever. Cameron used the morphing technique to show Patrick switching from human to metal to other human and back again. Sure, the technology was available before Cameron, but as you could imagine Cameron perfected said tech advances. But he didn’t let these groundbreaking effects get in the way of a truly compelling story. Young John (played by Eddie Furlong) develops a true father-son relationship with Arnie’s cyborg, complicating things but also bringing a much unexpected human element to the story.

So of course the technology used in T:2 was ripped off in much lesser films, but there is one bit of the story that was overplayed to an almost staggering degree shortly after Judgment Day became a worldwide phenomenon: Hasta La Vista, Baby.

That’s right, Schwarzenegger’s line to a frozen T-1000 was the catchphrase that caught on, the most memorable line of dialogue in the film that carried over into countless films and TV shows until the very sound of those words strung together created groans more than grins. And it didn’t help that they were in some stinker films. There was Larry Fishburne in Deep Cover, saying “hasta la vista, motherfucker” right before shooting some thug down. Then the line is delivered verbatim in drivel like Lorenzo Lamas pictures and the comedy Last Supper, where Jason Alexander uses the line comedically. And on and on we go with the line, even finding its way into Star Trek V, and run into the ground repeatedly.

Now there were several films that dealt with the apocalypse in the 90s, following the success of T:2, and some weren’t half bad (Strange Days), some were pretty terrible (Deep Impact). But there were also pictures like Virtuosity, where a cyborg killer is sent to destroy from a computer and is able to change his shape much like the T-1000. The problem is, the story around Russell Crowe’s evil computer monster is thinner than an anorexic restaurant’s menu. This tends to happen; when films come out that are great successes with groundbreaking technologies, all of the films that try and cash in do so in a hurried way, and they lose the humanity of the original.