Cinema has the uncanny power to conversely reduce art down into the gutters of trash and elevate trash into the realms of art.

Spring Breakers is trash through and through. But I think it's probably art as well. 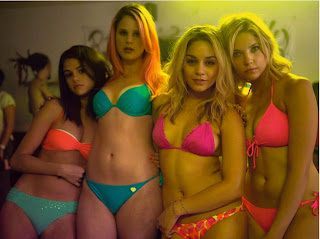 I'll say this of it: Spring Breakers is a Harmony Korine film. Auteurism, like it or not, continues to live in American film through Korine's very specific art-punk film collages.

The question when it comes to Korine, or any other filmmaker that doesn't trade in working towards some clear statement, is whether any of it actually means anything or not. I'm convinced, especially in the case of Spring Breakers, that it doesn't, which is exactly it's meaning. Kornine is, first and foremost a provocateur after all. He pushes people's emotional buttons without giving any real clues as to why. Maybe it's because he's just a snotty prick, but maybe there's something more here. His films always posing a challenge to the viewer simply to endure them.

Anyone who has seen Korine's debut film Gummo, will surely never forget this: 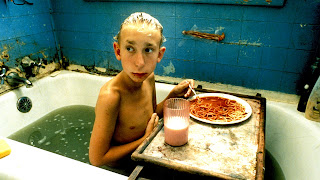 The stomach churns just thinking about it.

Sure, the formally educated and those who regularly fancy themselves above the philistines of the average cinema-going population can argue about the "poetics of transgression," or some other such neatly worded bullshit as The Boston Globe's Ty Burr did in his review, but when it comes down to it, the twist in my gut every time the Gummo kid takes another bite is what Korine as an artist is really about.

He even hints to this during this video interview, during which he, with a mix of charm and couldn't-give-a-fuck-less, mumbles a bunch of non-answers at the interviewer. This is a man that doesn't seem to know what he's trying to achieve other than that he wants to achieve something. That he conducts most of it with a half smirk in response to his interviewer's inane questioning is somewhat endearing...he knows what he's doing, even if he hasn't the slightest clue what he's doing, if you see what I'm saying?

The interview is almost 8 minutes long so for the sake of brevity, there is one particular quote from Korine that really cuts right to the chase of Spring Breakers and what's it's purpose is: 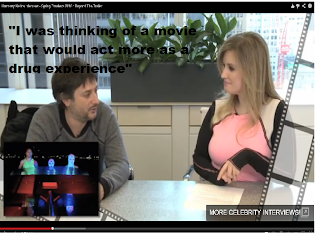 No shit, eh?
So there's the base concept for the film. In that case, mission accomplished. Spring Breakers is full of bong hits, lines snorted, pounding electronic music, and slow-mo flashes of day-glo freak outs (sometimes to the tedious point of repetition). It is, if that's what you want from cinema, a towering success. The artist has achieved his personal goal. Kudos to him.

One must, to continue this line of thinking, discuss Korine in terms of auteurism, in so much as that one must consider the artist as more important than the art, even if the base ambition doesn't ever rise above the point of trash. Really though, just as much art is discovered on the trash heap as it is in the ether.
Case in point: 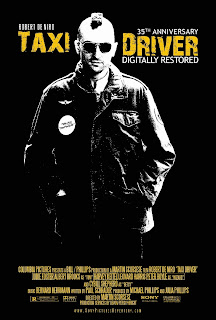 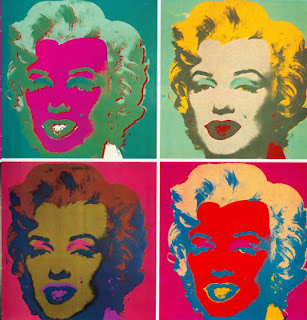 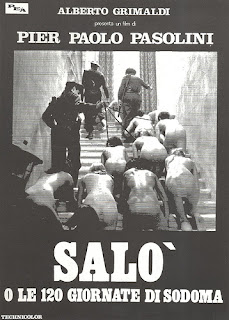 The list goes on forever.
So where does that leave us with Spring Breakers? About in the same fucking place that all of Korine's films leave us: right back where started, at square one. Neither here nor there.
However, the questions such indifference poses in it's wake are paramount: Hate it or love it? Great artistic statement or indulgent drug experience? Cheap exploitation or examination of it? Narcissism or cluelessness? Indictment or exoneration of the behaviour it portrays? And all of a sudden you're engaged in a personal debate with yourself without even knowing it.
The film itself offers no clues and the filmmaker himself, who probably couldn't give a fuck either way, doesn't help much either. It's point seems no more than that it exists to move us in one emotional direction or the other. The Rubik cube with one square missing. It's not meant to be solved, rather just to challenge the body's endurance.
The film is then, at some base level, no more than a parlor trick filtered through the eyes of an artist with a unique, snide, disconnected, funny and challenging view of the world. It's easy to hate. However, that's the power of both art and trash; the fuel that flames their existence. I guess that's why they go together so well.
As for Spring Breakers? I repeat, it's a Harmony Korine film. Translation:  a masterpiece and complete shit all rolled into one. Make of that what you will.
﻿
Posted by The Taxi Driver at 12:54 PM