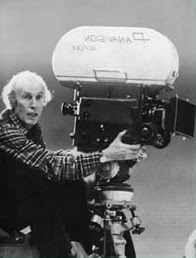 I was only planning on doing one post today but sadly I am forced to write a second for Eric Rohmer, one of the cinema's greatest treasures, has died at the age of 89. Rohmer was one of the central filmmakers who went from writing about film in the immortal Cahiers du Cinema in Paris to spearheading the French New Wave during the 1960s into international acclaim. Often overlooked in favour of the two most famous showboats of the New Wave: Francois Truffaut and Jean-Luc Godard, Rohmer was always my favourite. There was something so utterly calm and yet so hopelessly romantic about almost all of his work. They were the kind of films that had the breezy Romanticism of a classic French poem, the lightness and tranquillity of a fairy tale, but also had a human love of people and the details of their behaviour. No one but Rohmer could make you appreciate the unmistakable pleasures of wind blowing through your hair or the sound of pebbles shifting under your feet. However Rohmer was also the great philosopher of the human heart. His characters knew love and heartbreak, passion, desire, flirtation, affection, and so on and weren't afraid to lay themselves bare in order to analyze it. Not only did they act out their romances, but they talked about them. Long passages of many Rohmer films are dedicated simply to characters talking about feelings and desires, urges and impulses. That's what fascinated Rohmer and what was to be most cherished about him: he loved the thoughts and actions that occur in the margins of life. Because of it he was one of the most unapologetically romantic filmmakers there ever was, with many of the films playing like a valentine to their characters. Of course Rohmer was not for everyone. Gene Hackman spoke a famous line in Arther Penn's 1975 film Night Movies: "I once saw a Rohmer film. It was like watching paint dry." Fair enough, but that was also one of Rohmer's most endearing qualities: that his characters were intelligent and literate and were allowed to simply talk until they had run out of things to say. Rohmer never reduced his films to characters following the conventions of a redundant plot. Rather, all one needed to know about the plot of the films was in the title. Everything else was human drama.
Posted by The Taxi Driver at 12:49 PM