The Greatest Movies That Made Going to the Movies Suck: Jaws 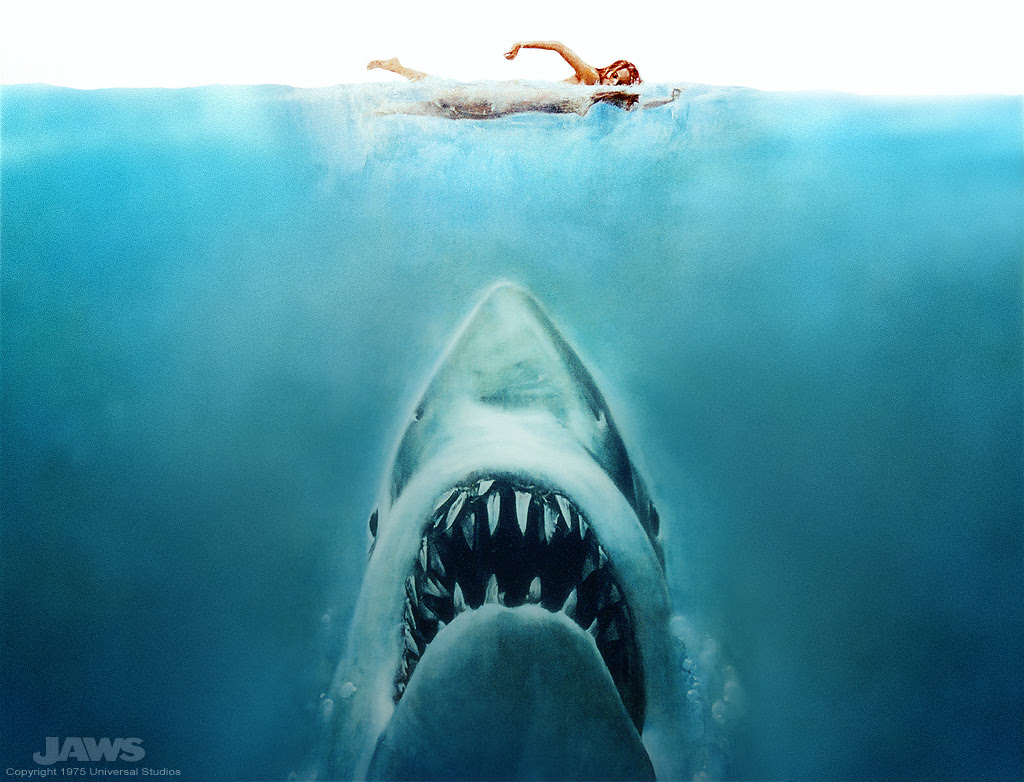 Depending on who you talked to back in 1975, Jaws was either the last great film of the infamous director driven Hollywood 70s era or the first bad one. It was both a beginning and an end. Coppola was burnt out, Frienkin set his own bar too high, Bogdanovich, had fallen out of box office favour, Hopper was out of his mind, Penn was an afterthought and Scorsese was falling into great reviews but not so great returns.

Then there was Steve Spielberg, a goofy Jewish kid who stood outside of the typical drug-fueled 1970s archetype and was instead the kid who thought big and dreamed bigger. Before 75, Spielberg had worked in TV where he made his first feature (made-for-TV’s Duel) and had a forgotten Goldie Hawn vehicle under his belt.

When the prospect of Jaws came up everyone doubted it. His contemporaries felt the film was against everything they stood for and even Spielberg struggled to complete the picture with a mechanized shark that he hated. However, from the darkened opening imagines of a young couple going skinny dipping on the beach, to the first notes of that iconic score, a classic exercise in terror was being born.

Jaws, in spite of all its routine elements, was a truly unnerving experience: a film in which a collection of regular people are terrorized by an element of nature. Here it was a shark, but as the years went on the animals changed (bees, spiders, piranhas, bats, snakes, etc.) while the formula stayed essentially the same. However, what those films have in imagination they lack in Jaws’ conviction.

What Jaws knew that few of its imitators did was the fundamental concept that the potential danger that lurks off screen is far more frightening then the thing that is causing it ever could be. By taking issue with the shark, Spielberg was, maybe unintentionally, forced to keep it off screen until the final act, creating POV shots that are far more menacing and suspenseful than indeed the mechanical shark actually ends up being. Jaws, unlike the films that were coming out around it, was all style, but as suspense films go, it was unrelenting in its mastery of the form.

The problem with the trend that Jaws spawned though is twofold. On one hand it not only birthed three pathetic sequels but also a slew of cheap and sloppy direct-to-video and made-for-TV imitators like Shark Attack or Piranha (that both ended up spawning their own sequels). Of course these films were simply focused on providing cheap scares, possessing none of the tone, mood or subtly that made people stay away from the beach for years after 1975, instead opting for bad special effects, cheap thrills and routine violence.

Secondly, the film, made on a budget of under ten million and grossing upwards of $130 million, signaled the return of blockbuster filmmaking; the kind that the early 70s Eurocentric American auteurs worked so hard to overthrow in the first place. Gone were the days of artistic integrity and serious subject matter that had permeated the films of the early 70s and born were the days of The Poseidon Adventure, Airport and The Towering Inferno; high concept films that aimed at one thing: to make as much money as possible by throwing spectacle into the wind and seeing how it landed.

Of course, Spielberg almost always conducted himself with integrity and produced quality work, but as is the case with every landmark success, studios quickly scrambled to get lightning to strike twice and still do to this day. In the days of Twilight and Transformers, where special effects dominate and the production aims for the lowest common denominator kind of audience; where Hollywood churns out one big, glossy tentpole movie after the other, one can’t help but look back and think that Jaws, in some way, had something to do with it all.

Who would have thought that one cheap little b-movie could have blown up beyond all expectation and defined an entire generation of both cheap trash and expensive garbage but, in one way or another, Jaws is just that film.
Posted by The Taxi Driver at 3:23 PM