Greatest Movies That Made Going to the Movies Suck #5- Lock, Stock and Two Smoking Barrels

Cinema was built on genres and one of the most enduring genres is the gangster/crime movie. Often overlapping with other genres like film noir, thrillers and even comedy, gangster movies have been a mainstay of Hollywood since the golden age of cinema. But in the United Kingdom they have never had the same relevance and reverence, true there have been some great British gangster movies like The Long Good Friday, Get Carter and Brighton Rock but they have all been a bit few and far between with no collective. Then in 1998 with Lock, Stock and Two Smoking Barrels all this changed but was it for better or worse?

ason Flemyng) and Bacon (Jason Statham) have been friends since childhood, seeing an opportunity to make a fast buck they scrape together £100,000 as a stake for an illegal card game hosted by local “porn king” Harry "The Hatchet" Lonsdale (P. H. Moriarty). The Game: three card brag (far more British than poker). Eddie the cardshark of the group sits down to play not realising the game is fixed. Not only does he lose the money but he also has to pay £500,000 within a week to save his fingers and his father's pub. With time ticking away fast they overhear a plot to rob a group of local dope growers. Then throw into the mix a pair of hapless Scouse thieves, a brace of valuable antique shotguns and mob enforcer Big Chris (Vinnie Jones).

The movie is well written, funny and original. There are some compelling characters and a great battling underdog theme. It is also unashamedly British. It doesn’t pretend to be a Hollywood movie, set in London with a British cast, British humour. The movie didn’t exactly save the British film industry but it really kick-started it and put it on a new path. It was the first sign in a decade and a half that Colin Welland declaration at the Oscars "the British are coming" may be true, it wasn’t. The problem with the movie is twofold; as well as the countless imitators it also launched the Hollywood career of British thespians Vinnie Jones and Jason Statham, neither are good actors but both are big stars. Jason Statham: As crap as The Transporter (2002) was, it did have few fun moments and was relatively harmless, did it really need two sequels? What was Crank (2006) all about? In the Name of the King: A Dungeon Siege Tale (2007) was directed by Uwe Boll, need I say more! He has become the Seagal/Van Damme of the past decade, as their movies go direct to DVD Jason Statham movies still get theatrical releases. On top of all this he has had leading or prominent roles in remakes of Death Race, The Italian Job and Mean Machine, three movies that all have one thing in common, they aren’t as good as the movie they are based on.

Vinnie Jones: Although not the most talented footballer in the world, he was a skille 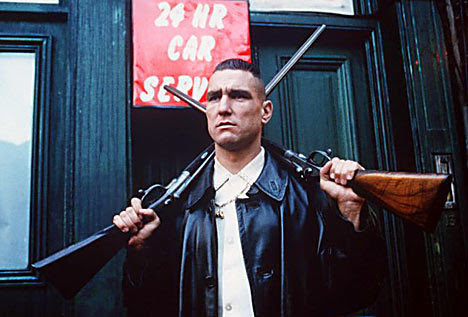 d defender who played on his hard-man reputation to defect attention from his abilities. In 1988 at 23 years old he won the FA Cup with Wimbledon, the so called “Crazy Gang”. Since his retirement from football he has begun to come across as a really nice guy, with this said, he isn’t a good actor. Two directors have known what to do with him, Dominic Sena in Gone in 60 Seconds and Midnight Meat Train in Ryûhei Kitamura gave him minimal dialogue. Other directors: Brett Ratner (X-Men: The Last Stand), Barry Skolnick (Mean Machine) chose not to do this!

As for the offending imitators there are many but the worst offender is the only feature directed by Edward Thomas. Rancid Aluminium came out just two years after Lock Stock. What is supposed to be a cleaver weaving plot is actually chaos at best. The acting is abysmal the script laughable, the best thing I can say about the movie as a whole is that it is forgettable. Then we have the collective works of Nick Love, the writer director of four nasty little movies in five years: The Football Factory (2004), The Business (2005), Outlaw (2007) and The Firm (2009). These films glorify thugery and violence amongst everyday people with little artistic merit but they are still riding the Lock Stock bandwagon. Even Guy Ritchie is guilty. After the failure of Swept Away he returned to the genre with Revolver, an utter mess of a movie. When this didn’t work he tried again with RocknRolla, whist not a bad movie it is still a pale echo of his earlier movies. But there is a glimmer of hope, Lock Stock producer Matthew Vaughn had a new movie he wanted to make but Guy Ritchie wasn’t interested so Vaughn directed it himself. That film was Layer Cake and it moved the British Gangster movie to add to this. With Sherlock Holmes Guy Ritchie proved he could be a director for hire and he could operate in other genres, well sort of!
Posted by The Taxi Driver at 9:51 PM