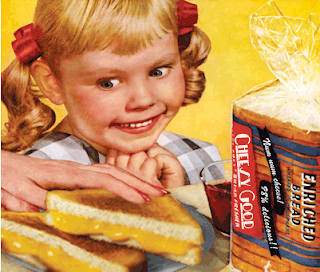 Looking back at popular culture and wondering just what the fuck we were thinking. 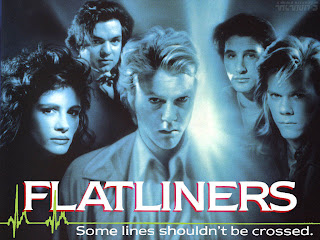 Flatliners came out in 1990, which was that strange transitionary period in American culture where this 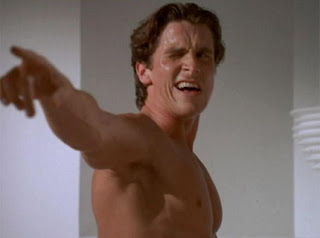 Was starting to become this 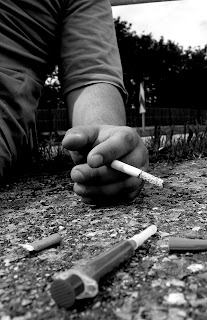 And sure enough, the film constantly looks like it's suffering from a severe case of the coke sweats. 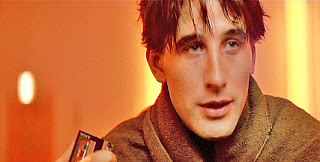 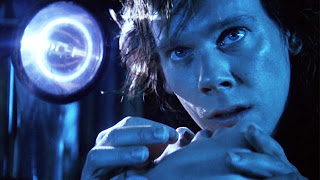 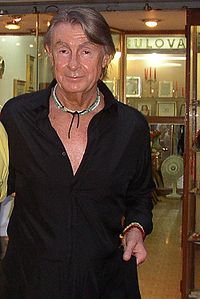 Which means it's highly stylized. 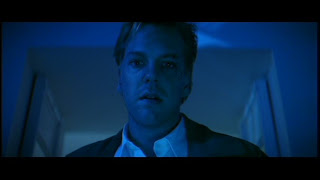 And a tad gay. 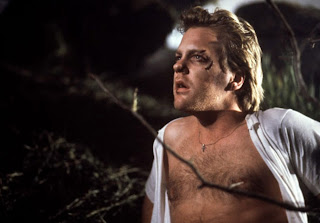 It revolves around an interesting premise. Dr. Kiefer Sutherland convinces a group of fellow med students to help him in an experiment in which he will kill himself, staying dead for upwards of a minute to see if there really is anything beyond death and then be brought back. 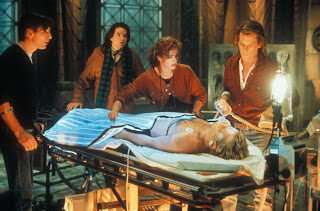 The experiment is a success and soon each member of the group wants to try, deciding on who will go next, auction style, by betting on how long they are willing to be dead before being jolted back.

But alas, drama being what it is, there's a problem. The cast find that, upon dying, they are encountered with sins from their past that manifest in physical form back in reality.

Julia Roberts is haunted by her drug addicted father who killed himself when she was young. Kevin Bacon is encountered by a little black girl on the subway that he made fun of in grade school, 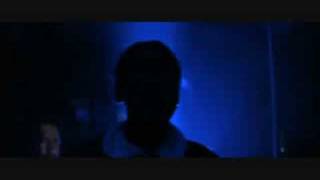 Kiefer Sutherland, who gets the worst of it, is haunted by a creepy kid, 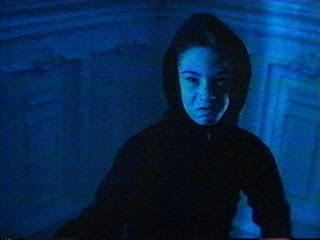 who tries to kill him in the back of a military truck with a pick axe, but not before earlier pinning him down and hocking one serious loogie into his mouth... 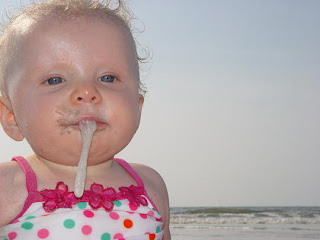 And don't forget William Baldwin. He is haunted by hot girls who want to fuck him.

Oliver Platt, who is the straight man that doesn't flatline, sheds light on the serious nature of the shit these people have gotten themselves into when he declares, "Good thing I didn't flatline. My 350-pound babysitter would be chasing me for the half-eaten pastrami sandwich I stole from her."

That about sums it up how far the film slips away from its original premise and into utter ridiculousness. 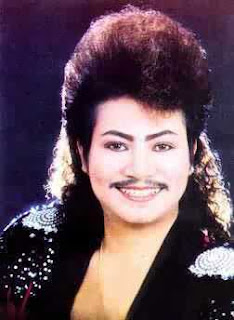 The film's premise is a good though and, for maybe a quarter of the way, is handled with intrigue and intelligence. Sutherland wants to find a meaning in life that both religion and philosophy have failed to provide answers for and the film almost addresses the matter of ethics in relation to how far we should let physical science experiments go.

Roberts also has a crisis, believing that maybe what's beyond death is not utopia, but rather a depressing place where the past is there to haunt you.

However, all questions of theology, philosophy, ethics, and science fly out window as the film can't quite make up it's mind on whether it wants to be a horror film or not and in the process forgets altogether to explain how in the hell these in-death reflections become physically manifest in the real world.

I guess there are just some mysteries in the universe that man will never be able to answer.